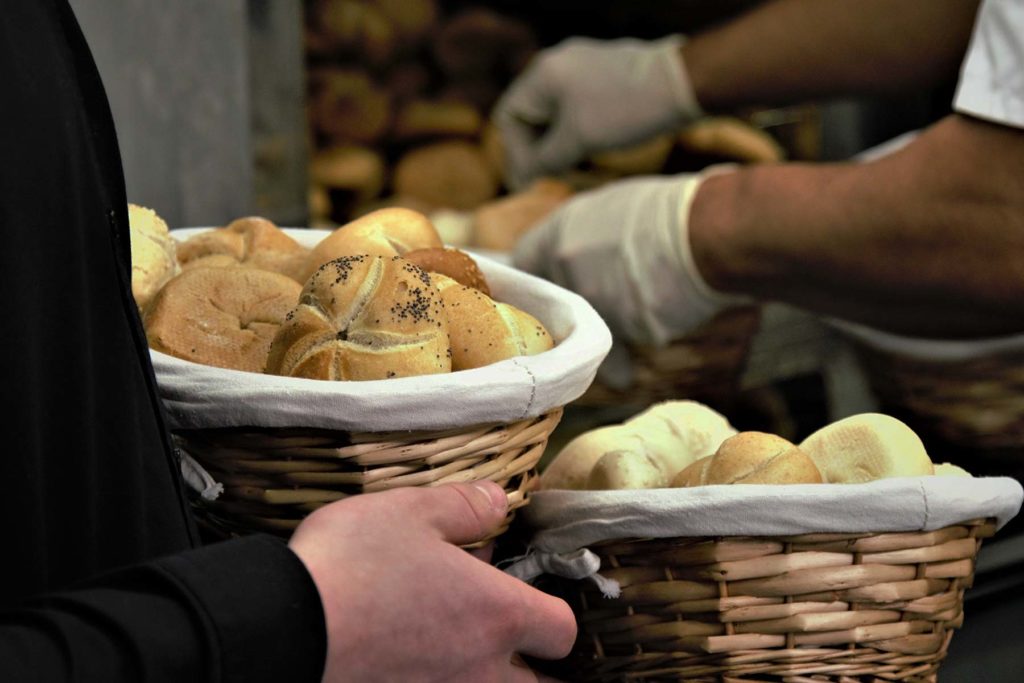 Communion has recently become one of my favorite Christian practices, because I love the way it demonstrates (and calls us to) unity in the body of Christ.

When I was a kid, I didn’t really understand communion. I knew it as a time to think about the bad things I’d done, confess those to God, and thank Jesus for giving his life on the cross for me. I thought of it as a time of remembrance, but I didn’t really begin to grasp the power of the Lord’s Supper until I began worshiping in a community that practiced it a little differently.

Shortly after Shannon and I were married, we joined a Nazarene church that embraced the traditions of the Christian faith in a way I’d never experienced before. They did this in a number of ways, but one of them was that, during the Lord’s Supper, they didn’t pass a plate down the pews – they invited us to come forward and receive the elements. As we stood and stepped out of our pews, we joined with our fellow Christ-followers in a movement toward the cross.

Now, at the time, I didn’t really understand why this church practiced communion this way, but I felt that there was something different about it. Since then, as I’ve studied Scripture and Christianity and explored my faith, communion has become one of my most treasured Christian practices.

There are several names for it – communion, the Lord’s Supper, Eucharist – and they all reveal slightly different angles on what it means, but I find myself particularly drawn to the name “communion,” and I’d like to explain why.

Recently, my studies have focused on the apostle Paul’s letters to the church in Corinth – which we have in our Bibles today as the books of 1 and 2 Corinthians. The Christian community in that city was one that Paul himself had founded. According to the book of Acts, he lived there for 18 months while he built the church in Corinth before he moved on to other cities – it was while he was away that he exchanged letters with them. Now, eighteen months isn’t a long time, so when Paul left them, they were still “baby” Christians… or maybe toddlers, if we want to be gracious… and we see that reality reflected in his letters.

A Brief History of Corinth

To understand Paul’s letters to them, we need to know a little about the city of Corinth. It was a fairly young city in the Roman Empire – it had been completely destroyed hundreds of years before, but Julius Caesar rebuilt it about a century before Paul visited.

When Caesar rebuilt it, though, he did so by filling it with ambitious freedmen – former slaves – which gave them incentive to build and make their own destinies for themselves. So many of these men who had been slaves quickly became elites in the social order of Corinth. But with this sudden wealth and power came a need to guard their wealth and status, so it didn’t take long for Corinth to develop a system of factions – kind of like unions for people in particular trades or social circles in the city – to defend their power.

Worldly Influence in the Corinthian Church

That vibrant, fluid culture was how the Corinthian Christians had been born and raised, and after Paul left, they very quickly brought those same tactics into the church, creating social hierarchies that elevated some at the expense of others.

That’s why, at the very beginning of Paul’s first letter, he tells them they are not to be divided into “parties” that follow different teachers – because they were using those parties to divide themselves into different groups, different tiers of “Christian,” based on economic status, doctrinal beliefs, or other metrics… the same way the rest of the world was doing it in Corinth.

Unity: The Way of Christ

So the entirety of Paul’s letter hinges on this idea of promoting unity within their community. In the looping, winding way that Paul tends write, he is pleading with them throughout the letter to break down those divisions and, instead, find their center as a community in their shared commitment to Christ.

One of his strongest demonstrations of this, at least in my opinion, is in 1 Corinthians 12 where he talks about their community as being the “body of Christ.”

This metaphor of “the body” was common among ancient thinkers and writers. In Roman society, people would often talk about groups of people as being different parts of a body – they would discuss how some were to be treated with honor – the heads, the hearts, and so on – and others were to be treated with shame – hidden from view, ostracized… I’m not going to name those body parts.

But Paul takes that metaphor, which everyone would have recognized, and flips it on its head. Instead of saying that some members were worthy of honor and others dishonor, he says that every part of the body is indispensable, and that the reality is that we treat the parts considered dishonorable with greater respect.

Unity is Found in Diversity

In doing this, Paul emphasizes the diversity of their community. Just prior to this passage, he acknowledges the different gifts that each person brings to the community. They all have an important part to play in the church – they may not all look the same, or behave the same, or believe the same, or share the same convictions, but they are equals because of their shared commitment to the Way of Christ.

And this is where we really get to the heart of what I wanted to talk about. If you flip back one more chapter to 1 Corinthians 11, you read Paul chastising them for the way they were practicing the Lord’s Supper. He points out that they had been allowing their factions, the worldly divisiveness that had seeped into their Christ-centered community, to break them apart from one another as they celebrated at the table of Christ.

Division Makes Them Unworthy of the Table

Paul says that their division at the table makes them unworthy. Until recently, I’d always read this passage as saying that Christians would be unworthy if we came to the table with unconfessed sin in our hearts – if we came before God as liars, or with pride in our hearts, or something like that – but Paul is actually saying that their sin was in coming before God as a divided body. In their divisions, they were disrespecting some of their members, and for that reason, Paul says, they will be judged.

If you read through this chapter, you’ll see that over and over Paul refers to the body of Christ. As he does this, he is deliberately foreshadowing the metaphor of the body that you and I just discussed, which is found in chapter 12.

Paul tells them that when they, as a Christian community, come together for communion, they are not simply eating and drinking together. They are not simply remembering a past event and confessing their sins to God. They are demonstrating the very heart of the gospel, which was to recognize the shared humanity of each member, united in love as the body of Christ, each with their own gifts and convictions, but one Church.

Friends, this is what I love about communion.

When we come forward and receive the body and blood of Christ, we are proclaiming that we refuse to be complicit with the divisive ways of the world, but that we are instead bonded in our commitment to the Way of Christ. When we practice communion well, we come together as one diverse, messy, holy body that honors the image of God within each of us by recognizing how much we need one another, despite our differences – or, more likely, because of our differences.

I pray that it may be so.